Signs of heat in cattle 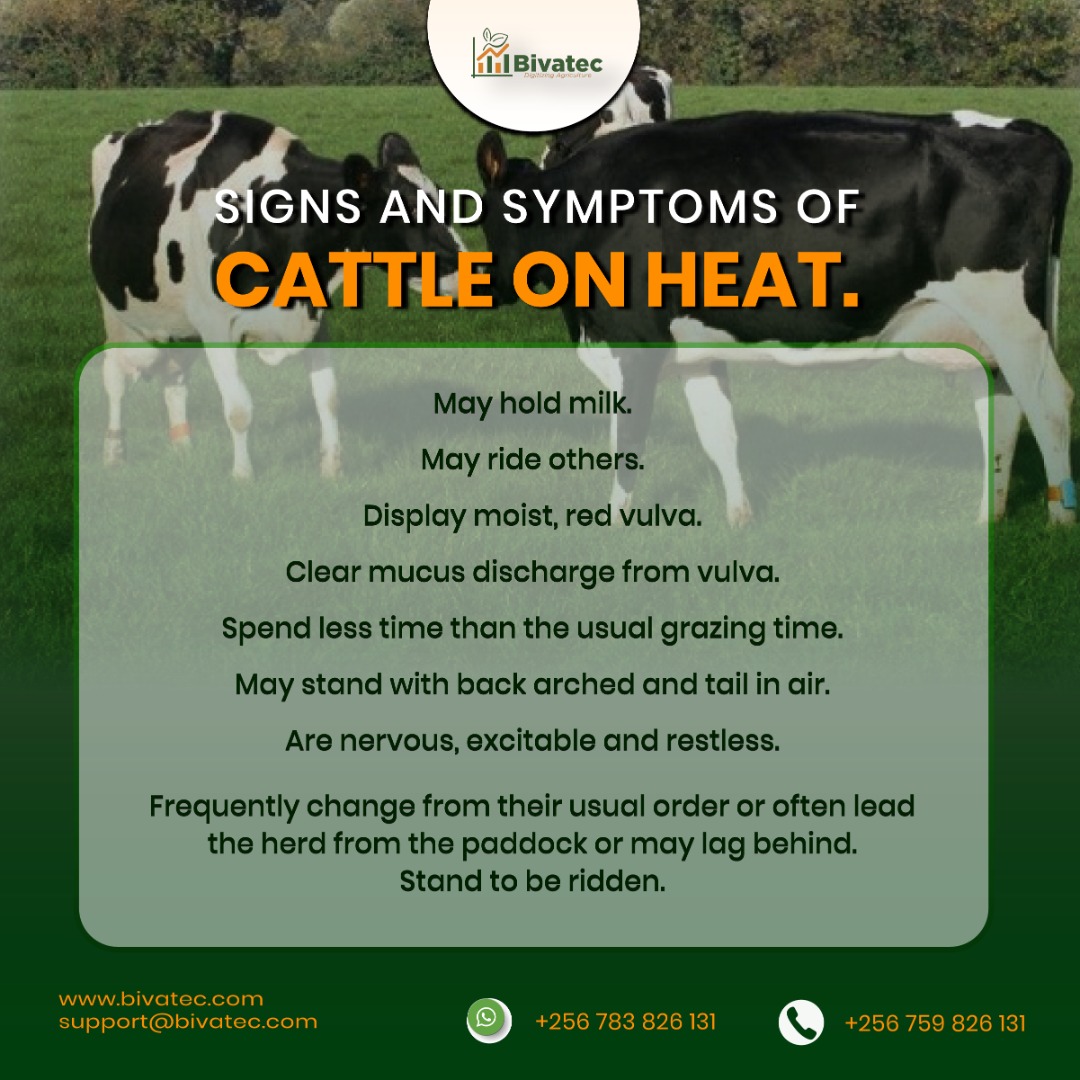 · There is mucus discharge from the vulva or on the tail.

· The vulva gets inflamed (swells) and there is a change in its color from pink to red.

· It mounts other cows.

· It allows other cows to mount it.

· There is a reduction in milk production in lactating cows.

· There is loss of appetite for some time.

· There is a slight rise in body temperature.

. The cow will get excited and nervous. This makes it run from one place to another while bellowing.

· It will stand nearer to the bulls to be mounted.

Signs of pregnancy in cattle

· The cow will not go on heat 21days after mating.

· The udder fills up with milk.

· The cervix closes up.

· A veterinary officer can by putting his hands in the rectum feel the corps luteum in the ovary.

This is a method of serving a cow where an inseminating syringe is pushed through the vulva and a vagina where semen is deposited in the lower part of the uterus instead of using a bull naturally to serve a cow.

· The farmer is able to control or eliminate venereal or bleeding diseases.

· The farmer is able to control inbreeding on the farm.

· It enables the farmer to improve his herd by collecting semen from different types of bulls.

· t is packet friendly since money that would be used to buy and maintain bulls is used to buy more cows.

· It is economical since it’s cheaper to pay for A.I services than to keep a bull.

· Semen from old, lame and died bulls can be used, which is impossible in natural mating.

· A.I prevents injury in small cows and heifers by big and heavy bulls.

· Breeding can be controlled as the farmer will breed animals based on a systematic program.

· A.I increases fertilization of some animals because spermatozoa are deposited in strategic area.

· Semen from a good breed can be made available in remote areas where such breeds are not available.

· A.I can introduce stock into countries where pure-bred sires could hardly survive.

· Infertility or sterility can easily be detected.

· Many animals can be served from a single ejaculate.

· A.I can not be done successfully on females that do not have obvious heat periods or females whose heat periods can not easily be forecast.

· Little will be achieved if inferior sires are used. in case sires were low in milk, meat, wool, or diseased A.I will not be fruitful.

· A.I can only be carried out by experienced personnel

· It doesn’t give animals chance to enjoy themselves naturally.

Please feel free to check on my cattle manager software if you have found this article helpful.

Tell us to discuss about a certain subject and we’ll get back to you with details about your enquiry.